Is Phoenix a Good Place to Live? 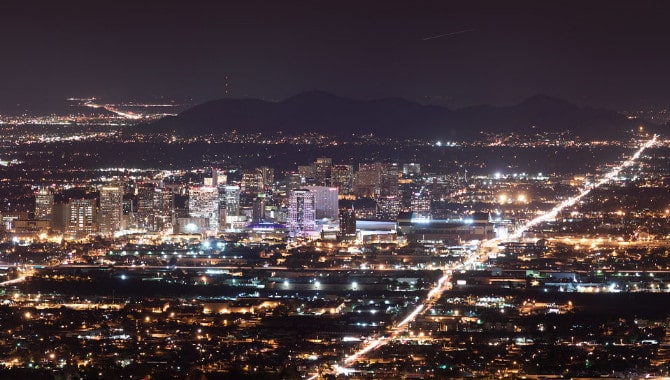 Moving to Phoenix, Arizona as an expat is well worth considering. It is a bustling city set in the middle of a desert, and although it does get hot, that is a minor inconvenience because you can enjoy the outdoors all year long. Greater Phoenix is one of the most thriving growth regions in the U.S.

Is Phoenix a good place to live? Phoenix is a unique city because it does not have any skyscrapers, rusty cars, potholes, and historical landmarks. However, it has gardens of lush blooms, professional sports, properly maintained roadways, and day tours to an excellent variety of places. In addition to that, the state of Arizona doesn’t subscribe to daylight savings time, so it might take some time for newcomers to get accustomed to the new time zone.

Whatever reason you have for moving to Phoenix, you probably want to know more about the finer details.

In this article, we look at those details and more.

Is Phoenix a good place to Live?

According to Neighborhoodscout.com, Phoenix is safer than 7 percent of the cities in the United States. The crime rate is 44.81 per 1,000 residents, which is higher than the overall crime rate for the Arizona State.

Any expat moving to Phoenix with kids will be glad to know that the area offers excellent schools. Some of the best-rated schools are Alhambra Traditional School, BASIS Phoenix, Arizona School for the Arts, BASIS Ahwatukee, Phoenix Union Bioscience High School and Madison Traditional Academy.

Depending on where one chooses to live in Phoenix, they will most likely need a car to move from one point to the next. A network of highways that service the city keeps traffic moving fast and HOV lanes help to reduce congestion on local freeways during rush hour time.

Read Also: Is Philadelphia Pennsylvania A Good Place To Live?

Moreover, Valley Metro gives residents access to a bus service throughout the whole metro area, including several satellite communities like Anthem and Buckeye. There’s also a light rail service that links the downtown regions to some suburbs in Tempe and Mesa. Residents also use bikes to get around.

When it comes to social life, there is a lot to do in Phoenix. The terrain offers a chance for hiking, kayaking, paddle boarding, watching desert wildlife and watching sports matches.

Is Phoenix a good place to Work?

Tourism is one of the biggest industries in Phoenix, mostly because of the climate. About 43 million visitors fly through the Phoenix Sky Harbor Airport annually, making Phoenix the starting point for many vacations in Arizona, and thus creating job opportunities in the leisure and hospitality fields.

The city is also becoming a technology center, with numerous web-based firms such as GoDaddy and InfusionSoft setting up shop here. There are also financial services industries in the area too like Wells Fargo, American Express, JPMorgan Chase & Co., and Bank of America, which employ large numbers of residents.

Read Also: Is Dallas Texas a Good Place to Live?

Is Phoenix a Good Place to Buy a House?

Phoenix is home to several banks and credit unions that make it possible for locals to mortgage their homes. The interest rate for a 20-year mortgage plan is around 4.40%. Other than credit companies, there are also numerous insurance firms in the area for those who want to protect their property. The average home insurance cost in Phoenix is about $1,453 per year.

Is Phoenix a good place to Retire?

Phoenix is a great option for any retiree who wants to enjoy the Arizona weather while still staying in an urban area. It is the largest city in Arizona State and the sixth most populous city in the USA.

The city is famous for major luxury resorts and nearly 200 golf courses. Moreover, there are countless festivals, museums, restaurants, and exploration sites. Phoenix has something for everybody.

Another great reason to consider this city as a retirement place is the availability of retirement homes. The average cost of living for seniors in assisted living centers is roughly $3,500 per month. The price can be as low as $1,100 a month or as high as $8,300 per month, depending on the facility.

Read Also: Is Austin a good place to live?

Is Phoenix a good place to visit?

Many sun lovers looking to escape the snow during winter come to Phoenix to enjoy the warm, dry climate. The city offers numerous arts and cultural attractions, shopping, dining, exemplary resorts and hotels, and historic neighborhoods. Many people visit this metro area to enjoy the refreshing outdoors hiking, golfing, biking, or climbing.

A significant tourist attraction in the area is the Musical Instrument Museum, which is one of the biggest of its kind worldwide. With a collection of at least 6,800 musical instruments from nearly 200 nations and territories, the museum is spectacular and has five permanent galleries. Special traveling exhibitions and a range of Signature Events are held every year at this facility’s theater.

In Papago Park, visitors get a chance to set their eyes on the magnificent Desert Botanical Garden. The gardens combine art and culture and are home to tens of thousands of plants. It is also a good spot to view hummingbirds and butterflies. Furthermore, extensive trails wind themselves around the center, allowing visitors to take nature walks.

Another museum that attracts tourists is the Heard Museum, which dates back to 1929. It is devoted to the preservation of the art and culture of the Southwest Indians, with exhibits of pottery, textiles, pottery, kachina dolls and jewelry. The museum’s galleries and courtyards showcase traditional and modern Native American Art.

A walk through the desert is, without a doubt, always a fantastic way to spend a day, and the city of Phoenix is home to a complete variety of hiking trails for all types of hikers. There are trails for adventurous hikes, such as the hike on Camelback Mountain, and other short, easy trails, ideal for bird watchers and nature enthusiasts. These can be found at Papago Park and the Lost Dog Wash Trailhead.

The Phoenix Zoo is the perfect spot for children. It is home to over 1,400 animals, but it is famous for its Sumatran Tigers and Orangutans. Additionally, there are four different trails in the center, including Africa Trail, Arizona Trail, Children’s Trail, and Tropics Trail. There are also kid’s programs at the facility as well as splash pads, playgrounds, and events.

Children will also find fun at the Phoenix Children’s Museum. It was opened in 2008 and houses about 14 galleries offering fun and exciting displays meant to engage growing minds.

What is the cost of living in Phoenix, Arizona?

Is Phoenix a good place to invest in property?

Phoenix’s real estate market is one of the best performing housing markets in the country. Whether it’s the employment growth that is fueling demand for homes or the population increase, all in all, the Phoenix housing market is a promising investment opportunity for many.

Is Phoenix a good place to raise a family?

When it comes to family fun, healthcare, education, childcare and affordability, Phoenix ticks all those boxes. As a result, moving to this area to start a family is a worthwhile option.

previousCost of Living in Edinburgh – For a Family, Single Person, International Students
nextIs San Diego A Good Place To Live?